Sandra Boynton: All The Board Books Go Berserk

The Giftler is supported by wonderful readers like you. We may receive compensation from our retail partners if you make a purchase after following a link in this post.

The enduring popularity of many works by Sandra Boynton proves that less is often more when it comes to children’s board books. Having read more than a thousand books to my own children, I can now clearly recognize the subtle genius of Sandra Boynton’s refined wit and pitch-perfect pacing.

Each pint-sized board book contains a world unto its own, complete with goofy characters and scenarios that seem both wildly unique and eerily familiar. Boynton’s efficient prose moves along at a crisp pace without ever being predictable, and her stories are somehow remarkably short and satisfying. That combination is music to a tired parent’s ears at the end of a day that’s already gone on far too long.

If Sandra Boynton is indeed the reigning champion of board books, which ones make the best gifts? Search for “Sandra Boynton” on Amazon and you’ll get nearly 200 results. Good luck with that. We break it down for you here, from the essentials to the esoteric! 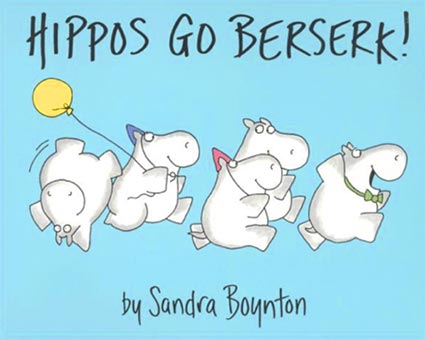 That ain’t a reindeer on the roof!

This is the one that started it all, way back in 1977. Hippos Go Berserk! remains quintessential Sandra Boynton. There’s the goofy hippos of course, but there’s also a raging house party, nifty and unexpected rhymes, a surprise appearance by a helicopter, and even some reverse counting thrown in for good measure.

Perhaps what we like best about this seminal children’s book is that the entire premise springs from what was once an all too common moment: someone sitting at home all alone in a quiet house with nothing to do. It used to be that when you picked up the phone, the point was to talk to someone. Laughter, fun, and new experiences often followed. Now you have to wonder: If the bored hippo had picked up a cell phone instead, would anything interesting have ever happened? 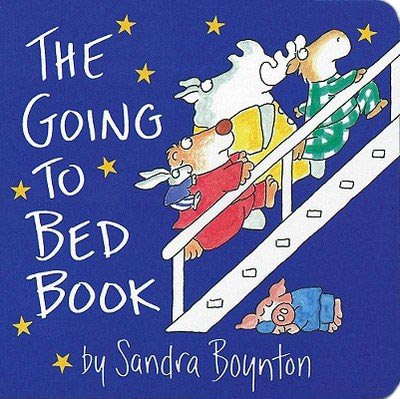 Short and sweet. Just like the person you’ll be reading it to.

If there’s a more perfect bedtime book out there, we haven’t found it yet. The Going to Bed Book is smart and witty and oh-so short. Boynton’s steady rhymes flow like the ocean and then surprise with a rogue word or two that send the story veering delightfully sideways. The plot is goofy and far-fetched, and yet the characters embrace it with nothing less than total zest.

Where most board books are plodding and predictable, The Going to Bed Book is anything but expected. How many other young children’s books find the main characters exercising on deck, at night, surrounded by an expanse of open ocean? None. This is the only one! 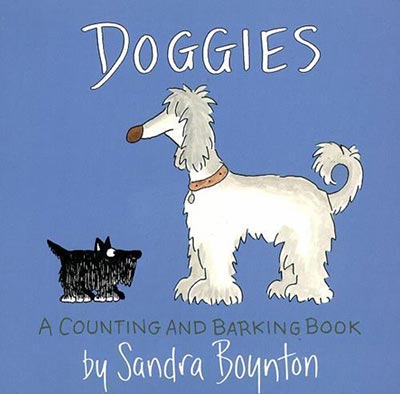 We’re not usually fans of incremental repetition, but this one works!

You don’t have to be a dog lover to enjoy the witty structure of Doggies, the bark-along board book from Boynton’s wildly productive year in 1981. No two dogs look (or sound) alike but all exude individual personalities that are likely to remind you of a distant uncle or your next door neighbor. What’s perhaps most refreshing is that just when you think you’re on auto-pilot and know what’s coming next, Boynton changes things up and breaks the pattern. 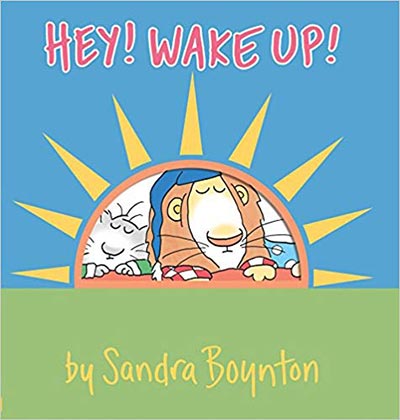 Turns the traditional bedtime story inside out, like only Boynton can do.

Get your morning routine off to a quick start with a prescriptive reading of Hey! Wake Up!, which perfectly compliments Boynton’s long catalog of board books for bedtime.  Stretch, shout, and shimmy with big guys and little guys to get ready for whatever the day brings. Before you know it, your little one will be bounding out of bed, saluting the sunrise, and getting dressed without a word of instruction. Who knew having kids could be so refreshing? 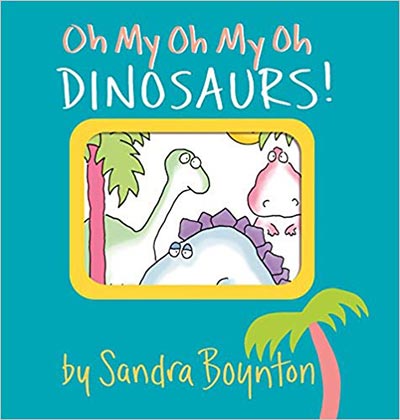 Love your dinosaurs, warts and all.

Who else would conceive to rhyme “later” and “elevator” in a short book about dinosaurs? How about “lean” and “green?”

In one of her most enduringly popular works, Oh My Oh My Oh Dinosaurs, Boynton proves once again that she’s the undisputed champion of quirky kids prose. Who says dinosaurs have to be sharp toothed and full of menace? They’re so much more fun when they’re sharp witted and full of goofy grins instead! 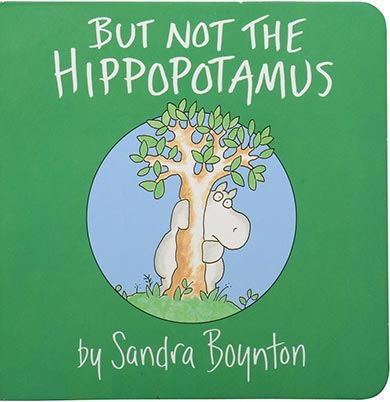 Why wait around for an engraved invitation? Just jump right in!

With so many party people showing up for Hippos Go Berserk back in 1977, there was bound to be a shy one hiding out amidst the frenzy. It took Boynton another four years to tease out the character, but here she is in all her hesitant glory. Will she ever dance in bogs, try on hats, and sip grape juice with the goose and the moose? Whether you’re an introvert who knows what it’s like to be stuck on the outside looking in or an extrovert looking to mingle with one more hippo, this is the silly tale for you.

As a parent of young children, you can read this book 500 times and never get bored. You can say that about very few board books…